ARRMA takes its 4X4 3S BLX speed bashing platform to the next level with the VORTEKS Stadium Truck RTR. It’s the fastest, most advanced ARRMA 1/10 scale 4X4 model yet, and the first to include the benefits of Spektrum Smart electronics and AVC.

ARRMA® has taken its 4X4 3S BLX speed bashing platform to the next level with the VORTEKS™ Stadium Truck. This is the fastest and most technically advanced 1/10 scale 4X4 vehicle in the ARRMA® lineup, and it’s engineered to deliver astonishing speed, control and durability – at an incredibly affordable price.

With the installed, 2S or 3S compatible Spektrum™ Firma™ 3200Kv brushless motor, the VORTEKS™ is fast right out of the box. Using a 3S LiPo battery and an optional pinion gear, it easily becomes the first ARRMA® 4X4 3S BLX model capable of 60 mph and more!

ARRMA® adds the security of advanced Spektrum™ electronics to the VORTEKS™ Stadium Truck’s speed and toughness to create a totally exhilarating bashing experience. With its included DX3 DSMR® 2.4GHz radio system, SR6200A receiver and Firma™ 100A ESC, this is the first ARRMA® 1/10 scale 4X4 model to provide the benefits of AVC® (Active Vehicle Control®) and Smart technology straight out of the box.

With the AVC® system’s on-demand traction control, you can dial-in extra stability as needed to carve corners or nail jumps without backing off the power. You have full-throttle freedom over rough terrain, slick surfaces and loose dirt. When you don’t want the extra traction, just dial back the stability. The DX3 radio’s AVC® system works behind the scenes, making hundreds of minute steering and throttle adjustments per second to keep the VORTEKS™ Stadium Truck precisely on the line you want to hold.

Download the optional Spektrum™ Dashboard™ app to your mobile device – it’s available free from the iPhone App Store and Google Play – to take full advantage of the Smart electronics’ telemetry capabilities. Once you connect your mobile device wirelessly via Bluetooth to the VORTEKS™ Stadium Truck’s DX3 transmitter, you can use it to view top speed, battery voltage and other essential data in real time (requires an optional BT2000 Bluetooth Module, available separately).

The ARRMA® VORTEKS™ 4X4 3S BLX Stadium Truck RTR represents the highest level of speed and technology found yet in the proven tough ARRMA® 4X4 platform. If you’re a basher who wants the best – and who appreciates outstanding value – it’s all right here. 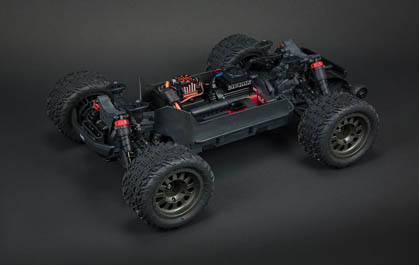 Features that contribute to the 4X4 3S BLX platform’s unstoppable performance include a stronger composite chassis and retained hinge pin plates; steering with more clearance for stones; castellated slipper pads and sliding gear mesh; and rubber-shielded bearings throughout.Extended height dirt defenders limit the amount of dirt and debris that can get into the chassis tub. Front and rear bumpers offer defense against impacts. 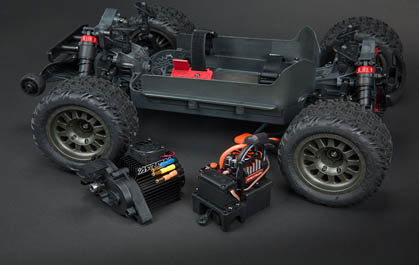 The VORTEKS™ 4X4 3S BLX Stadium Truck RTR incorporates the signature ARRMA® easy-access modular design. Separate, easily removable chassis modules for the power system, electronics and differential components make routine maintenance fast and simple. The power module can be detached from the chassis as a complete unit by removing just one screw. With the power module removed, the slipper clutch can be reached easily for servicing by taking out three screws that attach the gear cover. 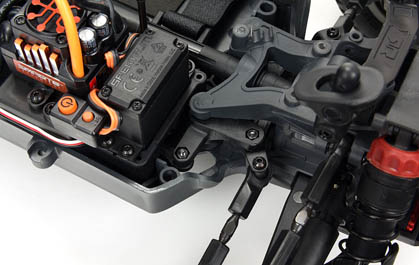 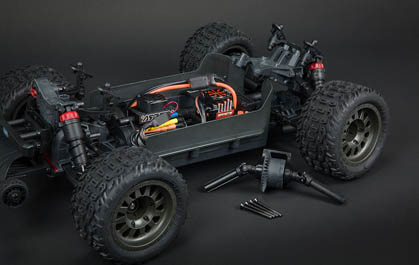 The differential module houses each differential unit in an innovative yoke design. Only eight screws need to be removed to release the front and rear yokes. The power module can then be detached, allowing you to pivot the gearbox cases for differential access. 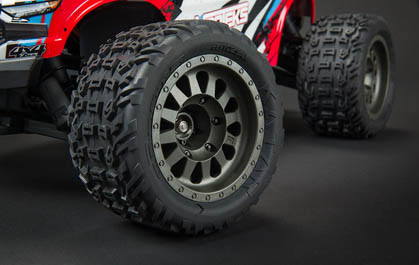 Multi-surface, vented dBoots® Katar™ tread tyres are mounted to tough, gun-metal color nylon wheels. The tyres provide aggressive grip and easy handling characteristics in all conditions and are made of high-quality rubber for long-lasting durability. 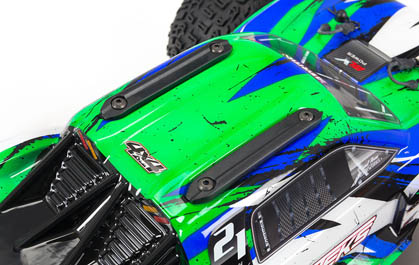 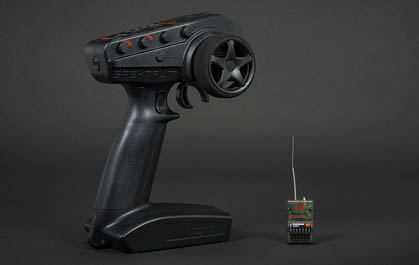 A first for any ARRMA® 1/10 scale 4X4 RTR, the VORTEKS™ Stadium Truck includes Spektrum™ radio equipment with telemetry-capable Smart Technology plus AVC® on-demand traction control for extra stability when you need it. 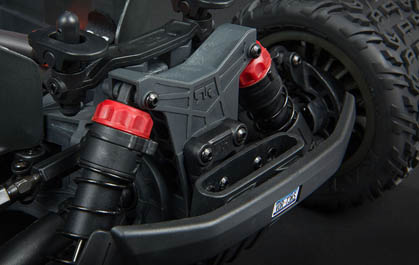 The self-bleeding, oil-filled shocks with silicone O-rings use a tried and tested, coil-over design for simple maintenance and amazing handling. Their innovative rod-end has a moulded-in spring perch for extra toughness.